I spit out words filled with poison because today I feel brave. I think of all the things I’ve kept to myself, all of the pain and anger I’ve hidden and unleash it on you. No, you did nothing wrong but you’re still standing there in a challenging stance asking to get knocked over

It’s not just white noise — my voice is the difference between a win or a loss. It’s the reason I’m here, asking for forgiveness. But look at you, you’re asking for it. That thick black cloud is my voice, suffocating you, silencing you, until I hurt no more.

My voice is a lot more than white noise. It’s more obtrusive than static and more electrifying than silence. It’s a beacon in the night, it’s a fire burning out of control. It’s lightning — no it’s thunder and it gets louder every moment

*Title of post is from an Alicia Keys song*

I saw this on Casie’s Blog and really loved it.

I think I’m going to play it every day for inspiration.

I hope it makes you feel something.

On a side note, the reason I’ve need some inspiration this week is because I’ve been kind of bummed out. I’ve gotten back three rejections for My Pen, My Voice.  It’s a good thing I self-published it because I don’t think I would’ve had a chance to see it in book-form if I hadn’t. I think it’s the whole “poetry” thing that’s throwing people off. If you’ve read it I would love to hear your comments and post them up here. The whole point of publishing my diary was for teenage girls to read it and relate to it. I’ve been going through a few comments that I got about it on Facebook and all the vanity in me plus my ego wants to share them with you. Yes, the comments are from my family members but they are my biggest fans and I appreciate all of them. Maybe the comments will urge you to check it out or get it for your younger cousin, sister, or friend that’s going through a hard time. I know what it’s like to feel alone and books were always a comfort for me, especially ones that I could relate to. 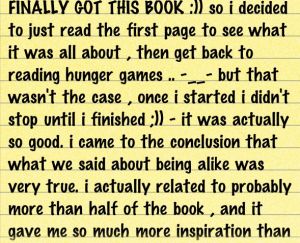 From an Editor that looked at my book.

Observe and appreciate everything.