So you read my review of The Jane Austen Marriage Manual by Kim Izzo and then decided to read it yourself. You loved it and thought: Wow! This would make a great movie! Well my friend, your wish has just turned into a reality. Canadian producer David Cormican bought screen rights to Kim Izzo’s novel The Jane Austen Marriage Manual and guess what, I got to interview him about it!

What is it about The Jane Austen Marriage Manual that made you want to see it come to life on the BIG SCREEN?

It just felt like I was reading a movie the way the characters and scenes play out. It’s very cinematic and every time I spoke about what book I was reading with my friends and family, the more I saw the same reaction: Why isn’t that a movie already?

Are you planning on sticking to the novel or are there going to be any/many changes to the story or characters? Will you be writing the screenplay? Will Kim Izzo fans be able to recognize her ‘voice’ in the film?

We’ve hired Kim to write the first draft of the screenplay. In talking with all of my partners it just makes sense and there would be no one better. Kim has such a wonderful voice written such a wonderful romantic comedy that already reads and feels like a film — and actually (Kim) has a history of writing for film and television before she started in to novels after going through the Canadian Film Centre’s writing program. Obviously we will have to cut the book down in order to fit it in to an under 2 hour time slot, so we are working on that right now as to what will stay and what must go or be combined. It’s a tough job to do, but Kim has some great ideas on how to do this and you will see her voice on every page of the script.

Kate travels a lot throughout the novel, will the movie be filmed in various locations? Which would you be most excited to film in?

That’s going to be the fun part, is deciding which countries we go to film in while keeping an eye to the budget. I’d love to have us shoot in England (obviously) and perhaps Austria, Switzerland or Germany. And there is also all of the trips she takes to Florida. We’ll have to keep our eyes open for locations we can use to double up as other locations to increase the production value.

Have you given any thought to who you would like to play the main characters?

All  the time. We have a very long and ever-growing list of people to play Kate and Griff and Scott. There are so many tremendous actors out there who could play the roles. We’ll have a tough time narrowing it down to the perfect people.

Are you a fan of Jane Austen? How do you hope to incorporate the quotes that began each chapter of the novel?

I am a fan of the classics. My first exposure to Jane Austen though was actually through the BBC version of Pride and Prejudice back in high school. In terms of incorporating the quotes device used in the novel. I think that is something we’d like to collaborate on with our eventual director for the film. There is clearly a lot of fun that can be had with this subject matter and it will be exciting putting all the pieces together and bringing it to the screen for fans of the novel, romantic comedies and Austen!

I’m really glad to hear that the screenplay’s first draft will be written by Kim Izzo, there’s nothing worse than a film adaptation that doesn’t have the same feel or voice as the novel — especially when you loved the novel so much! Thank you to David for taking the time to chat with me about all of this!

The Jane Austen Marriage Manual will hopefully be hitting the big screen in 2015 and I’ll be first in line to buy a ticket! 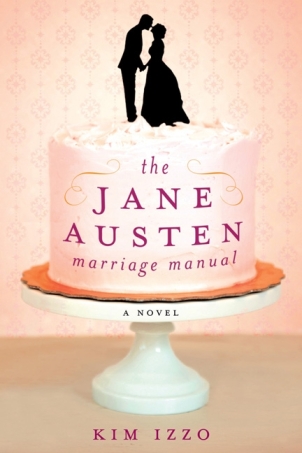 I fell in love with Kim Izzo’s writing after reading her second novel My Life in Black and White. Her work is filled with quick wit, classic charm, and fantastic fashion. They’re the type of novels where you get more out of it than you thought you would. They’re the type of novels that you can’t put down, and that you don’t want to end.  I was graciously sent a copy of her first novel by the author herself.  The Jane Austen Marriage Manual begins as most novels do, with a crisis. Kate is simply down on her luck, her mother gambled away their home, her grandmother is ill, her boyfriend dumped her for someone younger and put her into a load of debt due to his schooling, and she has lost her job. Her solution, take everything she’s ever learned from Jane Austen novels and put it into use. This forty-year-old ex beauty editor will try to solve all of her problems by marrying for money. She has been given a freelance writing assignment trying to answer the question, Is a woman of forty too old to marry for money? Kate finds the answer to that question and learns a lot more than she bargained for.

In truth, I have never read Jane Austen (gasp!), nor am I close to the age of forty, nor do I understand the desperation that comes with having everything taken away from you (thank goodness), but I still enjoyed this novel and related to it on different levels. Kim Izzo made me feel as though I had gone through ALL of those things and made me wonder what I would ever do in a situation such as hers. Could I marry for money? Could I pretend I was someone else? Do desperate times really call for desperate measures? For Kate they did and I enjoyed following her along in this journey. She’s a very flawed character, one that you even dislike for a few chapters, but she has such a tremendous heart, an independent mind, and has such a belief in true romance that you can’t help but root for her. What I like most about Kate is her determination.

I stomped away determined to prove that I could land in shit and come out smelling like a rose.” (107)

The Jane Austen Marriage Manual forced me to think about love, romance, and family relationships. How they’re displayed and depicted in movies and novels, and whether or not they can mirror real life. It’s so easy to get swept up in the kind of passion and grand gestures one sees and reads but, as the wise and handsome Griff states, “Love doesn’t have to be explosive twenty-four/seven. If you’d slow down long enough, you might be happy”.

Thank you to Kim Izzo for sending me this wonderful novel — I will definitely be following your writing, can’t wait for the next one!