It seems as though “I have a lot going on right now” doesn’t seem to encompass everything that is happening. There are so many precious moments that I’ve captured in the pages of my journal in hopes that they’ll appear real; sometimes the internet feels too much like  fiction. 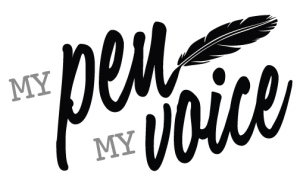 My Pen, My Voice goes on hiatus from time to time but always comes back with something new of offer. It comes back REVIVED. Sometimes it’s a new layout, other times it’s a new series, this time it’s a new logo, a new layout, AND a new sense of self. As intense as this year has been I can’t help but feel grateful for it. So many changes and challenges have torn me apart with the complex task of allowing me to find out who I really am. My twenties (so far) have been the most confusing and promising. Finally at twenty-six I understand and accept all that I am and what I have to offer.

I hope this newfound confidence and killer new logo will allow me to explore different kinds of writing while staying true to my voice.

Welcome to the new chapter of My Pen, My Voice.

P.S. Thank you to Victoria Stacey for the amazing new logo and for understanding EXACTLY what I was going for!

The page is blank but my heart is full.

Taking a step back to enjoy this world.

Every moment is a blessing; every failure a whirl.

It’s time to dance in the rain like a little girl.

When I was younger I was against looking back; moving forward meant forgetting the past. Yesterday as I went through my various memory boxes and packed up my old notebooks, I realized that sometimes the only way to know how to move forward is by looking back.

Relationships are quickly put into perspective as memories jump out of photos and leap off of letters. Reminders of who you were and how far you’ve come smile at you like an old friend. Suddenly your entire world expands and everything makes sense, including the hard times you couldn’t control, the hard times that you created, and even the good times you didn’t think could be beat.

“Taking time to look back, is a foundation on course to build a stable future.”
― Unarine Ramaru

I received a press-release recently about Triumph’s Beauty-Full collection. I don’t purchase underwear or lingerie all that often, so this press release fell short for me in actually purchasing anything from Triumph. What didn’t get lost on me was the fact that sometime in the last year or so, the definition of beauty has changed from being thin to being in love with your skin.

I love how little I hear about wanting to be skinny, about losing weight. I love that it’s more about being healthy and eating the right food. I love that there are women out there like the owners of The Store On Queen who emulate health, confidence, and beauty regardless of weight or size. I love that celebrities like Kelly Clarkson, Demi Lovato, Pink, Selena Gomez, Lady Gaga, and Lena Dunham are dismissing body-shamers and spreading love, light, and self-worth.

I love that my generation and the younger generation (from what my narrow little brown eyes have seen) have snubbed the notion that being thin is equivalent to being beautiful. I love going to the mall and seeing young women of all shapes and sizes trying on clothes and walking around with their heads held high. I know that there are tonnes of wicked and sad things going on in the world, but I also know that good things will only happen if we build ourselves up rather than cut ourselves down.

As a writer, using the correct wording isn’t enough, you have to use the ONLY word in the entire English language (or whichever language you write in) that will make the sentence perfect. And there is only ONE word — not a jumble of words listed in a thesaurus to choose from.

Days are longest when that word won’t come out from behind the bushes, when I’m lost in a labyrinth of possibilities and none of them stick out at me. There are days that turn into weeks when nothing sounds right. It is all crap. It’s those days or weeks that I question my abilities as a writer. Those days when I rush through a post or an email and scream at my reflection in the computer screen FRAUD!

Then there are days when all of the words are perfect; they exist one by one in perfect harmony. Together. Separate. They are my salvation.

Last weekend, Alex and I watched Whiplash. He’d seen it before and said to me, “when you watch this, think about your writing”, so I kept that in mind as the opening credits rolled out. There’s no denying that Whiplash is a time-bomb of emotion, a story that depicts what it really takes to be one of the greats. There’s a part in the film where the band teacher (Fletcher) says to his student (Andrew), “There are no two words in the English language more harmful than good job”.  Why? because it promotes mediocrity. It promotes that just because you’re good, you don’t have to push yourself beyond the capabilities that you don’t even know are there.

I was there to push people beyond what’s expected of them. I believe that’s an absolute necessity

If you’ve watched Whiplash, you’ll know that Fletcher is a little insane in the way he pushes his students – especially Andrew. But it kinda worked, didn’t it?

Andrew: But isn’t there a line? You know, maybe you go too far, and you discourage he next Charlie Parker from ever becoming Charlie Parker?

Fletcher: No, man, no. Because Charlie Parker would never be discouraged.

This line moved me beyond belief. It inspired me to sit down every morning and evening this week; to write all of the words I could let out of my head. It inspired me to start trying again, to believe in myself, and to push myself harder when the words won’t flow as well as I hoped they would. Because, the next Dorothy Parker would never get discouraged.

Those days are going to come and go. The days where you feel inadequate as a writer, noticing the strides other people are making, wondering why you’re not working hard enough to make them yourself. The days where the words get stuck in your brain, turning into a web of thoughts that cannot untangle. The days when you go to work with the most positive attitude and whimper in the bathroom because you’re making mistakes or feel overwhelmed. The days where nothing you do is right, or even enough. One of those days where you feel like shedding your skin and starting fresh.

Days and weeks where your anxiety becomes so intense it paralyses you, body and mind. You make an appointment with the doctor and the hairdresser on the same day at the same time. You forget about that story you started writing or that you promised to get together with a friend. It gets so bad that you feel sick ever day, your head aches, and your body sore. Those days where you take the anti-anixety pills your doctor gave you, but they just make things worse. They turn you into some kind of zombie, The Walking Dead are more alive than you.

But then there’s a day where everything is okay. Not just okay, but magical in its closeness to perfection. A day where you feel good, write well, and work better. Where a smile doesn’t leave your face and laughter widens your mouth letting through a booming sound known as pure, innocent happiness. A day where you know in your heart of hearts that you are loved, that you love others, and that even the bad days aren’t so bad at all.

Weekends are my absolute favourite; I get to catch up on my reading and blogging, spend time with my family, and have an adventure or two with my love. On Saturday Alex and I headed down to The Saint Tavern for breakfast.

I loved the dark and cool vibe of the restaurant, the deliciously creamy and strong latte, and the delectable Duck Egg St. Benny. The service was fantastic, it felt like being at home, with a bunch of other brunching strangers enjoying their meals. 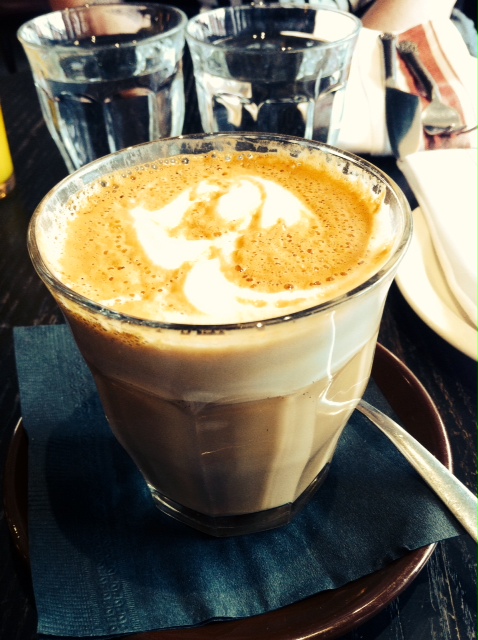 After breakfast we walked around the city and ended up at a tattoo parlour near my house. I finally got the “writerly” tattoo I’ve been wanting. It’s a semicolon on my right wrist, which was inspired by this photo on Pinterest. I’m hoping that it will remind me to use my spare time wisely. To use every moment that I’m not at working, writing things down, creating characters, and stringing stories together.

“There is no greater agony than bearing an untold story inside you.”
― Maya Angelou, I Know Why the Caged Bird Sings

I believe in all kinds of magic, in dreams coming true, in luck, and hard work. BUT I’ve very rarely looked for or believed in signs. I’ve had trust my gut when making decisions but I’ve never sought out signs from the universe to lend some help. On Friday, for the first time in a very long time I felt as though the universe was trying to tell me something. On the way to and from work, a giant white plastic bag flew into my windshield, getting stuck momentarily before I regained sight of the road in front of me. Also on the way to work I nearly got hit by a transport truck who was making a left hand turn (thank goodness I sped up at the last moment).

That was the moment I realized that life was trying to tell me something. It was literally trying to hit me in the face. Telling me to wake up and see the good in life. Telling me to stop letting nerves dictate my life and to go with the flow. Telling me to pay attention and make time for what I love to do. Telling me that life is so so short and it doesn’t make sense to spend a single moment dreading failure or even making plans.

Life is life and I have the capacity to handle anything that comes my way. I have a dream big enough to give me courage, a brain smart enough to give me strength, and a heart full enough to not only guide me, but to ensure that I have just the right amount of love and laughter in my life.

Sorry if I’ve been silent of the social media airwaves (and my beloved blog) this week. I started a new job and have had a difficult time managing my extracurricular activities. I’m sure that in due time I’ll be able to do both calmly and with confidence. I’ll be wildly available on social media (after work hours or on lunch), will be writing away at 6 AM, will be reading books and reviewing them often, AND sharing stories, blogs, and photos with you. Until I get into a routine I’ll be flip-flopping around as best as I can. Thanks for keeping up, for caring, and for reading the words that are close to my heart.